Before spending a year in Korea as an English teacher, I had never tried Korean food. Thinking about what I knew about Korea from pop culture, I expected that most foods would be spicy or contain a lot of rice and seafood. While that is sometimes true, Korean food is actually rich in different flavours and offers numerous delights for your taste buds. Whether you are in Korea for a day or a year, here is my personal list of must-try Korean foods. 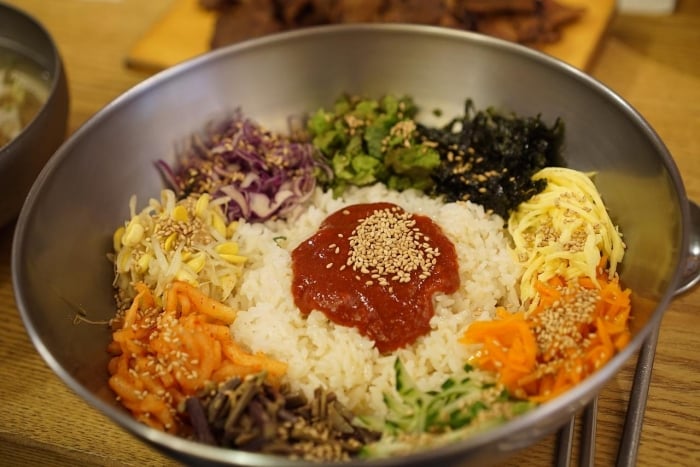 Bibimbap is one of my favourites because of how simple and versatile it is. This dish requires three basic ingredients: rice, vegetables, and gochujang (red pepper paste). At a bibimbap restaurant, you can often choose which vegetables you want, such as bean sprouts, carrots, and spinach, or if you would like to add a fried egg or bulgogi (Korean beef). Even if you do not customise your order, when you receive your bibimbap dish, the ingredients are separated into distinct little piles so you can remove anything you do not want. Mix everything together before digging in! 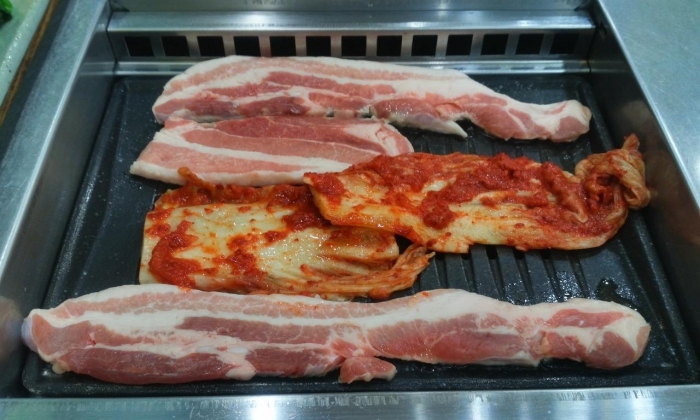 Samgyeopsal is a social meal, which I often ate with friends, co-workers, and the Korean host family I lived with. Samgyeopsal is the Korean word for pork belly, a cut of meat typically served barbeque-style. Samgyeopsal is served in restaurants with indoor grills at each table so you can cook the meat to your liking. The meat comes in thick or thin slices, which the youngest person at the table cooks and cuts with scissors into bite-sized pieces. These small pieces of pork are often served with lettuce and eaten as lettuce wraps, called ssambap. Samgyeopsal is usually served with several side dishes including onions and kimchi, as well as soju and beer. 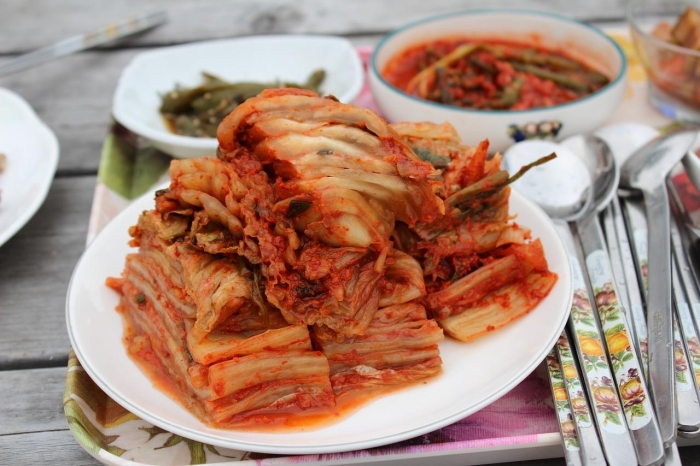 When I first introduced myself to my Korean students, many of them asked me, “Teacher, do you know kimchi?” Kimchi is Korea’s most famous traditional food and a point of national pride. Korean astronauts even took kimchi into outer space! Kimchi is made from fermented cabbage or radish, and usually includes ingredients such as red pepper flakes, fish sauce, and vinegar. There are hundreds of types of kimchi, and each region in Korea has its own speciality. Many types of kimchi are spicy, so it is common to eat a bland food like rice at the same time. Although kimchi is usually eaten as a side dish, it is also used as the main ingredient in soup (kimchijjigae is “kimchi stew”) or a pizza topping. Many Koreans eat kimchi with every meal. Kimbap, or “Korean sushi,” is a popular snack or picnic food in Korea. Consisting of vegetables, eggs, crab or bulgogi, and rice wrapped in a sheet of seaweed, kimbap is a delicious, portable food perfect for lunch on-the-go. Kimbap is one of the least expensive Korean foods, and a kimbap restaurant will usually serve a roll of kimbap with a small soup, kimchi, and radishes. With its cheap price tag and plentiful flavour, kimbap is the food I ate most often. On a warm day, I highly recommend buying kimbap at a local convenience store and having a picnic by the Han River. 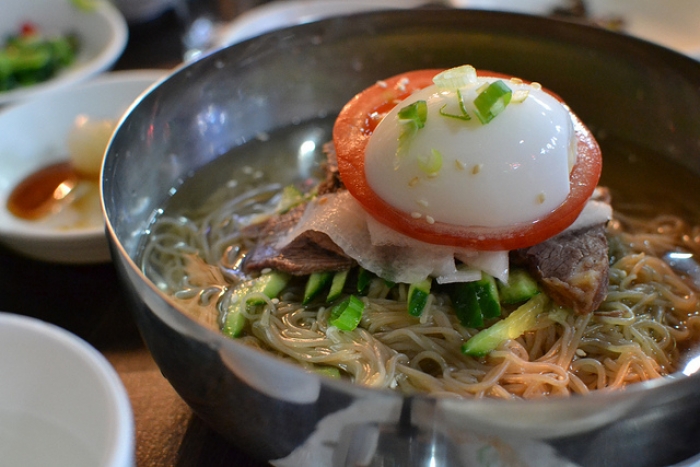 Although many Korean foods contain rice and vegetables, noodles are another common staple, especially in soup. Naengmyeon, or “ice noodles,” is a summer dish intended to cool you down on a hot day. Made with cold noodles, pears, cucumbers, vinegar, and gochujang, this dish is simultaneously cold and spicy—a surprising combination the first time I tried it! Naengmyeon can be eaten on its own, or as a delicious complement to Korean barbeque. 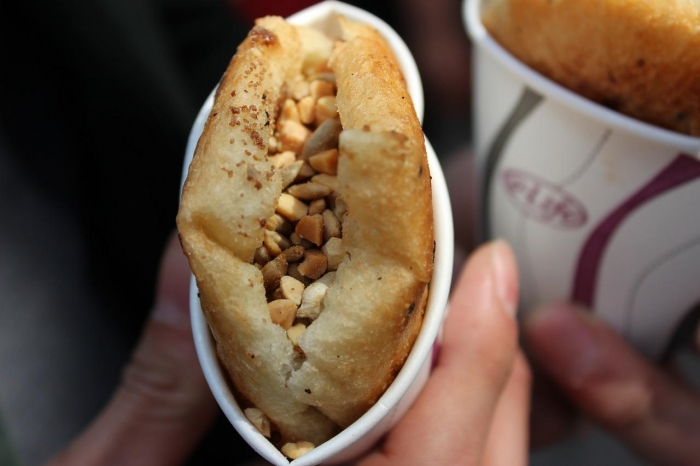 What’s a meal without dessert? My favourite Korean dessert is hoddeok, a delicious street food that is like a sweet pancake. The hoddeok dough is stuffed with a brown sugar syrup, seeds, and nuts, and then fried and served hot. This snack often comes in a paper cup so you can munch without burning your fingers. 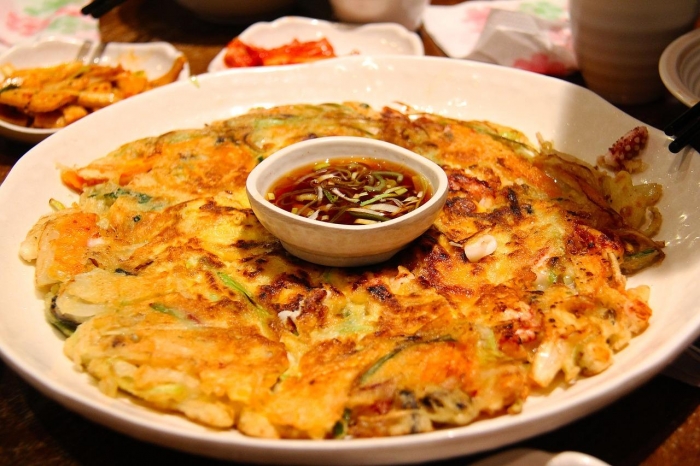 Compared to a lot of other Korean foods, which take a long time to prepare or should be ordered in a restaurant, pajeon is very easy to cook on your own. If you take a cooking class in Korea like I did, pajeon is likely one of the dishes you will learn to make. Pajeon is a Korean pancake made with rice flour and scallions and fried to a golden brown. Pajeon can also be made with kimchi or squid, if you prefer a spicy or seafood flavour. Pajeon is served as part of the main meal or a side dish. 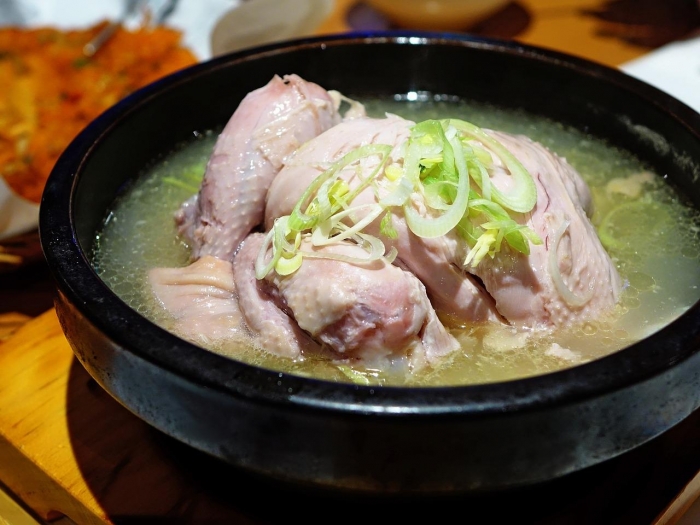 Koreans usually eat different foods during different seasons and have special dishes for holidays. One such food is samgyetang, a chicken soup made with rice and ginseng. In Korean culture, it is common to eat samgyetang on the three hottest days of the year, according to the Lunar Calendar. The idea is that the warm soup will energise you for a long, hot summer day. For me, samgyetang was a comfort food and reminded me of my mother’s home cooking. It’s a simple, but delicious and filling dish. 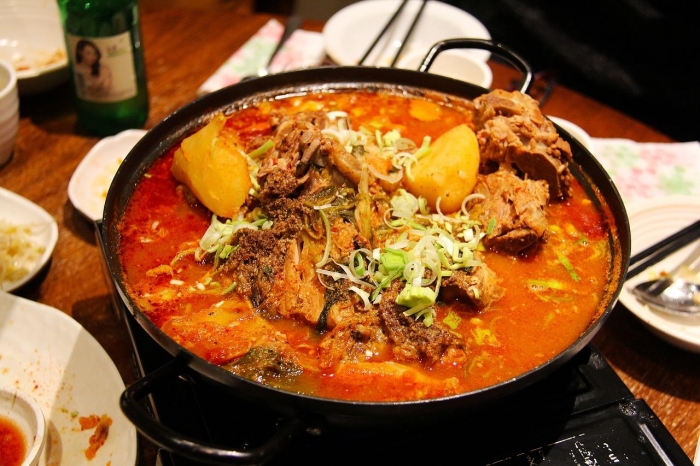 When I worked as a teacher in a Korean high school, gamjatang was one of the most popular lunches in the cafeteria. Gamjatang comes from the Korean words for “potato” (gamja) and “soup,” (tang) so gamjatang is a spicy soup made with potatoes and pork meat. The pork bones give a lot of flavour to the broth, while the potatoes create a hearty meal. Because of the red peppers sprinkled in the soup, this dish is a little spicy. I prefer to eat it with a small bowl of rice. 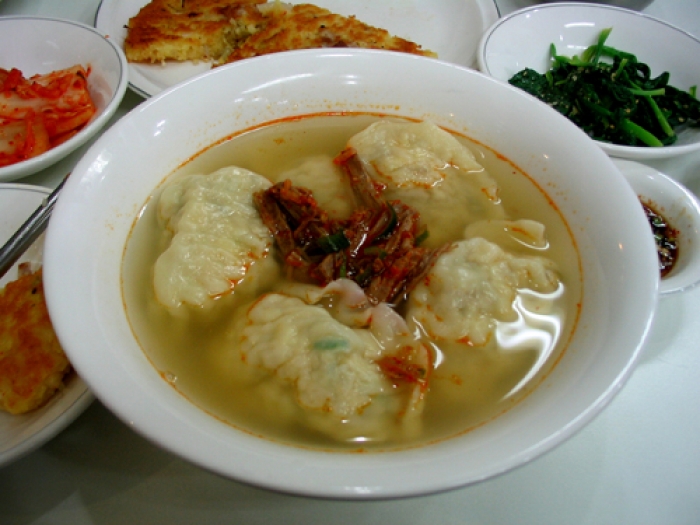 Mandoo, or dumpling, is popular as a side dish, main meal, or an ingredient in soup. Stuffed with meat, onions, and ginger, mandoo packs a lot of flavour into a little bite. Mandoo can also be stuffed with kimchi for a spicier meal. Mandoo can be grilled, fried, or steamed, and it is often served with soy sauce for dipping. I did not eat mandoo very often in Korea, so it was a special treat when I went with friends or co-workers to a restaurant that served it.

If you are like me and never had Korean food before going to Korea, be adventurous and try foods you would not have thought to try in your home country. Or, if you are a connoisseur of Korean cuisine, discover some new favourites! Mashike duseyo (bon appetit!).

A trip to Busan is a reminder that there’s more …

Summer in Korea can be very hot and humid. There …